Meet Charles Mudede, TFF jury member and Seattle-based filmmaker and writer, at this special Jury presentation. Mudede will present his 2005 film POLICE BEAT which premiered at the Sundance Film Festival. Stay after the film for a Q&A with Mudede.

Z (played by first-time actor Pape S. Niang) is a West African immigrant and Seattle bicycle cop. Over seven sunny days and six nights he pedals across the city, from Fremont to Phinney Ridge to Madison Park, in response to over forty different crimes ranging from the lurid to the mundane. This plot could be the impetus for grit-and-grime filmmaking, but director/co-writer Robinson Devor and co-writer Charles Mudede opt for an almost cosmic tone of serene remove.

The spacious and flowing images, shot in widescreen by director of photography Sean Kirby, rarely center the characters; rather, they place them in the grand contexts of their environments. Z himself maintains a contemplative distance from his job: his body is on patrol but his mind is on his girlfriend, from whom he is separated. This is enhanced by Niang's meditative performance, which emphasizes stillness and seems directed not towards the audience but inward, towards himself. Eschewing cop-movie cliches, Police Beat instead benevolently sweeps the audience alongside Z through his emotional topography and a Seattle almost fifteen years gone.-Andy Stark

Despite a relatively low budget, the film features gorgeous 35mm-scope cinematography from DP Sean Kirby, and manages to incorporate nearly one hundred different locations from the greater Seattle area and Pacific Northwest. 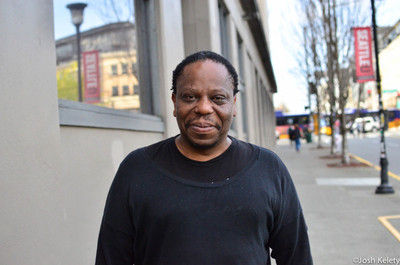 Charles Mudede—who writes about film, books, music, and his life in Rhodesia, Zimbabwe, the USA, and the UK for The Stranger—was born near a steel plant in Kwe Kwe, Zimbabwe. Mudede is also a filmmaker: two of his films, Police Beat and Zoo, premiered at Sundance, and Zoo was screened at Cannes. Mudede has written for the New York Times, Cinema Scope, Ars Electronica, C Theory, and academic journals. He also wrote the liner notes for Best of Del Tha Funkee Homosapien: Elektra Years. Mudede has lived in Seattle since 1989.

EVENT DETAILS
Special Jury Presentation: POLICE BEAT
October 4, 2019 at 7:15 PM
The Grand Cinema, Theater 1
606 Fawcett Avenue, 98402
Stay after the film for a conversation with Charles Mudede
Tickets are now available for advanced purchase online and at the box office