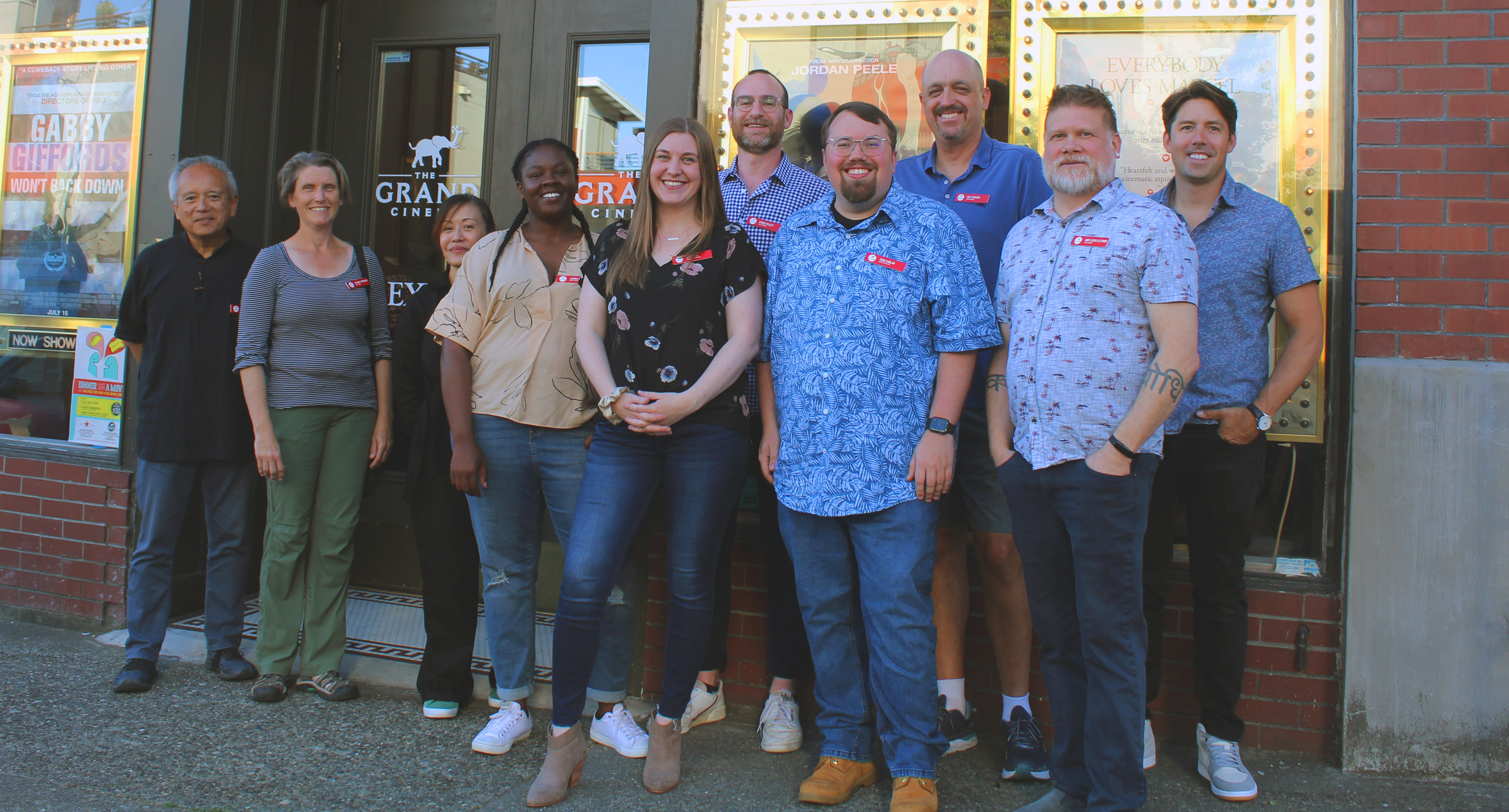 The Grand Cinema is a nonprofit; our strategic direction is guided and informed by a board of volunteer directors, representing our communities, who meet monthly.

The Grand's board comprises 13-17 members who help set policies, develop plans for the future, provide fiscal oversight, raise money, and advocate for the theater. (The board does not select films to be screened or involve itself in day-to-day operations.) Board members agree to serve a three-year term with the option of returning for a second term.

Every year members of The Grand Cinema vote on new and returning board candidates to serve. Per our bylaws: "the current board shall present to the membership a slate of candidates for board positions. Members will vote, with opportunity to comment, by ballot to approve or disapprove the entire slate."

Join us!  If you are interested in serving on our board, we are currently accepting applications through January 20, 2023.  An application can be found here.

The Grand Cinema current board of Directors roster

As approved by a member vote in March 2022 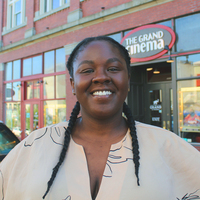 Born and raised in the Hilltop neighborhood of Tacoma, Jamika Scott is a writer, filmmaker, and advocate. As a founding member of the Tacoma Action Collective, she works toward building an equitable Tacoma and often incorporates her love of film into her social justice work. 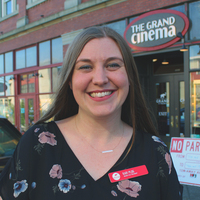 Kari has spent years fostering community connections, in Tacoma and beyond, as an award-winning journalist. Kari currently covers the South Sound for KNKX Public Radio. She’s also been a reporter at The News Tribune, an editor at Pacific Lutheran University, and a student newspaper advisor and adjunct instructor at the University of Puget Sound.

Kari is a proud SAG - AFTRA member who watches as many must-see films as her toddler will allow. She’s an advocate for helping our city thrive and intends to continue using her diverse network and skills to expand the theater’s reach and impact as board vice president.

Ryan (@indieartsvoice) is a movie & arts lover with over fifteen years experience in the film industry and arts marketing. She is co-founder and principal at Smarthouse Creative, a boutique agency that offers strategy and marketing support to artists and creative projects. Ryan has worked in almost every aspect of the film business -- from production and festivals to distribution and exhibition. Ryan loves working on movies and projects that make the world a better place, either by bringing joy and entertainment to people's lives, or because they have a message of social justice or challenge viewers to think in new ways. When not in a movie theater or performance space, Ryan enjoys riding her bike, hiking, and exploring new places with her partner Eli. 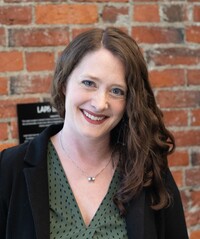 Kaarin joined the Grand board in 2022. She has worked in philanthropy for over a decade, and currently serves as the Director of Major and Planned Giving at KNKX. Kaarin graduated from PLU and Gonzaga School of Law. After law school, she focused on planned giving and proceeded to make her career in philanthropy. She now identifies as a “recovering attorney.” Kaarin, her husband, and their two young children live in Central Tacoma. They love traveling and adventuring, and in pandemic times have especially loved rediscovering the Pacific Northwest. 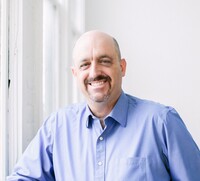 Eric has been a Grand Cinema board member since 2018, and a Tacoma resident since 1999. As a mortgage professional and small business owner, Eric provides the board with business experience and advice that allows the Grand to run at a high level while remaining economically sound and viable. In his spare time, he can be found chasing tennis and golf balls around the local courts and golf courses! Eric's favorite movies seen at The Grand include Juno, My Big Fat Greek Wedding, and Sideways.

Whitney once got a C in a documentary film class because she spent too much time interviewing subway musicians and not enough time in class. She has been working with documentaries ever since. Whitney is an audio producer and editor. Her editing credits include a doc short nominated for an Oscar (Rehearsing a Dream), a podcast nominated for a Peabody (How to Be a Girl), and a 2022 duPont-Columbia award winner (According to Need). She has taught audio to high school football players, non-traditional college students and public radio newbies. And she hosted an audio artist residency in Lima, Peru. Whitney is originally from the Catskill Mountains, and Tacoma is her home base.

Sarah Jane joined the Grand Cinema board in 2020. She grew up in Minnesota and moved to PNW in the 1990's to study music and visual art in college. Sarah Jane is the steward of @TinyArtGalleryOnCedar, a very small 24-hour art gallery featuring her paper collage and other art works by local creatives. She brings her development and fundraising experience to the Grand Cinema board and considers David Lynch's “ Twin Peaks ” series to be her love language. 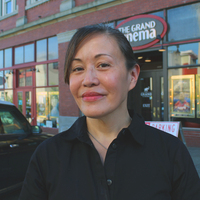 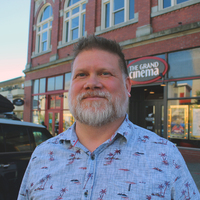 I moved to Tacoma in 1999, and my partner and I lived in an apartment in the Wedge Historic District just a few blocks from The Grand. With only one income, movies at the Grand were one of the few forms of entertainment we could afford while she was in school, and I have many good memories of films we have seen there. I have spent most of my career in nonprofit philanthropy as a grant writer and Development Director for organizations in Tacoma, and I am currently the Senior Grants Officer for MultiCare Foundations. I’m a ceramic artist, a gardener, and I love cooking. I also spend an inordinate amount of time playing pinball and repairing/restoring the two pinball machines I own. I am excited about the community engagement opportunities that the Grand is exploring, and the growing diversity of films and festivals and educational opportunities that The Grand brings to the community. There are so many exciting opportunities for The Grand to grow and I am grateful to be part of helping the theater continue to thrive in Tacoma.

David and his family became members of the Grand Cinema in 2009. He joined the Grand Board in 2018 and truly enjoys collaborating with such a diverse group of talented individuals. David has lived in Tacoma for 25 years after relocating from Phoenix, Arizona for work. He has held numerous leadership positions throughout the PNW. For more than a decade, he has been the Executive Director for Marine View Ventures; the economic development arm of the Puyallup Tribe of Indians. 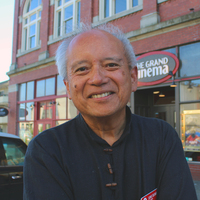 Locals know Serni Solidarios through the University of Puget Sound events he’s helped produce; you might remember the first visits to Tacoma by the likes of Maroon 5, Macklemore, Robin Williams, Pee Wee Herman, Vienna Choir Boys, Wynton Marsalis, Dizzy Gillespie, Jimmy Fallon, David Sedaris, Thomas Friedman or even Bob Hope. He also moonlights as a pianist/flutist (described by the Seattle Weekly as an “electric troubadour” ), or The Rocket, “a cross between George Winston and Jerry Lee Lewis, a society pianist for the obscenely rich”, and for 569 weddings, for which he is compiling a list of horror stories. 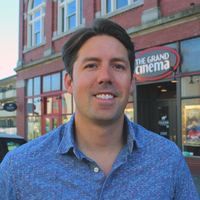 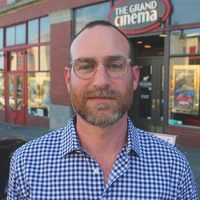 Chase joined the Grand Board in 2020, in the middle of the COVID - 19 pandemic. Originally from Dallas, he spent a while in Washington, DC before meeting his wife and moving to the West Coast in 2017. Chase has been in global health for the past decade, working with government and non - governmental organizations to help improve healthcare systems in low-income areas. He plays music, bowls, and likes old film noir.
© 2023 . All rights reserved. Site Designed by SiteCrafting.