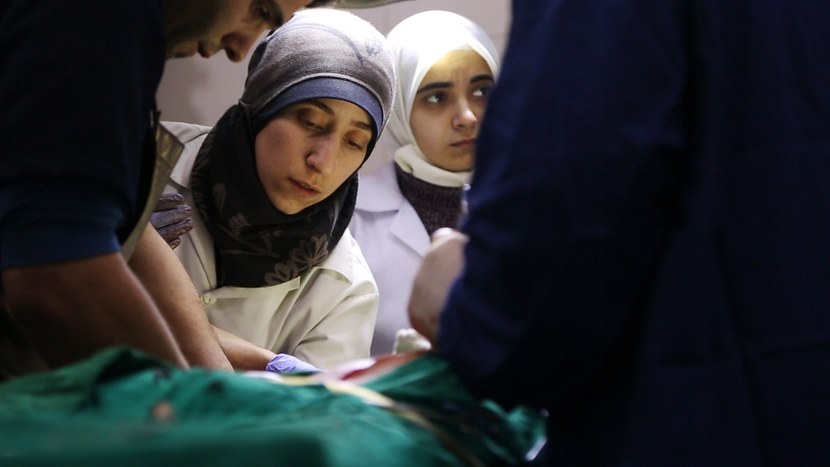 Academy Award-nominated for Best Documentary Feature. Thanks to the generosity of the filmmakers, we are able to offer FREE admission to all attendees for this important film. Tickets available day-of from the box office on a first-come, first-serve basis. Screens only on Tuesday, January 14 at 1:15 pm & 6:30 pm, part of our Tuesday Film Series.

Director Feras Fayyad returns to his native, Wartorn Syria to follow a dedicated team of female doctors who tirelessly treat casualties in an underground hospital while battling systemic sexism. Shot from 2016 to 2018, The Cave belongs to the top rank of war films. Syrian director Feras Fayyad takes us to a subterranean landscape that feels akin to the post-apocalyptic world of Mad Max (1979). With life too dangerous above ground, survivors create a network of secret tunnels under the city of Ghouta, near Damascus, for an underground hospital maintained by women doctors. In contrast to the many Syrian documentaries made from cellphone footage or shaky cameras, Feras Fayyad takes great care to visualize the landscape and its memorable occupants with artful cinematography. For anyone who feels jaded by Syria coverage, this work stands apart.

WATCH THE TRAILER
© 2020 The Grand Cinema. All rights reserved. Site Designed by SiteCrafting.