Hi there. My name is James Blanchard. I am a senior at Tacoma School of the Arts majoring in Graphic Design. As a part of my major, I have been interning with the staff at The Grand since February 2016 under the supervision of Faith Stevens, Senior Graphic Designer. As a part of my internship, I have been given the opportunity to write a blog reflecting on my experience, so that’s what you’re reading.

My interest in Graphic Design came about through my interest in film, so it only makes sense that I work in the graphics department at a cinema.

Connecting My Skills With Film 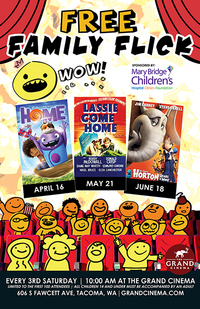 I have always appreciated film, taking enjoyment in films that play at The Grand and in making my own home films with my family. Despite my affinity for cinema, I have never felt attached to any of my own films, because I was always more interested in illustrative and other static works. In a lot of cases, the posters for movies captivated me more than the films they advertised. This place where film and art combine -- in a movie poster -- was my first introduction to graphic design. (There are also the small factors of my father being an advertising agent and my mother being a graphic designer herself but I'm sure these things haven't influenced me at all.)

Since starting my internship at The Grand, I have learned the ins and outs of graphic design, how to use the Adobe digital suite, and what it's like to be part of a creative workplace -- all thanks to the lovely staff here at The Grand Cinema, and to Tacoma's School Of The Arts Next Move office for helping me find this internship.

Instead of being tasked with standard intern errands - the coffee ordering, paper fetching, and boring kind of work - I have been given the opportunity almost from the get-go to work on graphics alongside The Grand’s Senior Graphic Designer. Under Faith's direction, I have made website graphics, in theater advertisements, print flyers, posters, and more - all to help out The Grand Cinema, but also for the benefit of bettering my skills as an aspiring graphic designer. So while I was still helping with production and other work efforts, the staff made sure that I was getting something out of the internship as well, which is something I don’t believe any other internship host site tries to accomplish so consistently.

The people here have supported me, they have given me the ability to hone my craft, and more than anything, they have treated me like a co-worker, not a vessel for free labor. My experience at The Grand last year was so positive that I had decided to extend my internship to the end of my Senior year (July 2017). Today, just halfway through that extended internship, the levels to which I have improved as a designer are astronomical.

So to put a cohesive point on my reflection, I would like to say again that the staff here at The Grand are especially nurturing, and I believe that any aspiring graphic intern would be lucky to work with them in the future. Treat your work seriously, be critical of your designs, and find an internship that treats you like more than just an intern.

I have a project on YouTub that would make everybody laugh

Your grandpa James is smiling down on you James! Right attitude and no fear of work and an amazing group to work with, make or break your experience! Well done Grand Cinema! And great written piece James!