Menu
October 25, 2016 Start Halloween early with the terrifying UNDER THE SHADOW

Over the past few years, Sundance has established its midnight screenings as the place to discover the next notable, scary film. In 2014, it was The Babadook; last year it was It Follows and The Witch. And this year, I’m going to call Under the Shadow the breakout. 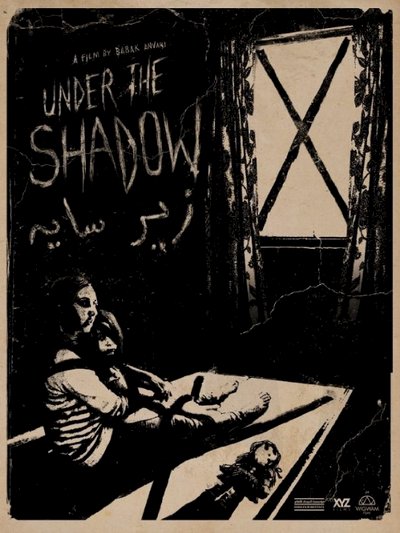 Babak Anvari’s Tehran-set demon movie has some recognizable conceits – complicated family dynamics, precocious child, stressed mom, nosy neighbors, threats both within the family and in the surrounding environment. But these elements don’t need to be tired, they can often be classic and if used well, they set a perfect scene to terrorize the characters and the viewer. This is what Anvari accomplishes with Under the Shadow.

For example, Under the Shadow is set in 1980s Tehran in the midst of the the Iran-Iraq War which gives the film the unique and constant additional threat of bombings, power outages, and more and more neighbors fleeing to safety. And the film’s lead Shidah, played by Narges Rashidi, is a smart, ambitious woman whose dream of returning to study medicine and become a doctor has been crushed because of her own choice to engage in political protest. She is deeply frustrated by both her lack of professional options and her role as a wife and mother.

One more fun twist on the classic ghost/demon terrorizer: in Under the Shadow, our monster is a djinn, a little used, and especially for Western audiences, little understood supernatural threat.

Much of the richness of Under the Shadow comes from its historical and Islamic inspiration – both a timeframe and culture I know very little about.

My perspective (see ignorance) made the story even more compelling. I was deeply curious about all the characters, about their politics, about the War, and about their beliefs. Combining this with a threat whose motivation is tantalizingly unknowable made for a deeply satisfying scare-fest.

Under the Shadow plays as a part of The Grand Cinema's Weird Elephant series. See it Friday, October 28 and Saturday October 29 at 9:09 pm.

And mark your calendars for Weird Elephant's November selection, the delightfully subversive sexpoitation horror film The Love Witch, playing November 25 and 26. Should be the perfect post-Thanksgiving palate cleanser!

This review was originally published on the blog ROBOT'S PAJAMAS.
Film Review, Weird Elephant (0)Comments
Back to Blog