The 13th annual Tacoma Film Festival, running October 4 - 11, 2018, turns its spotlight squarely on the best of the Northwest with its Opening and Closing Night films: PROSPECT and BOOM. 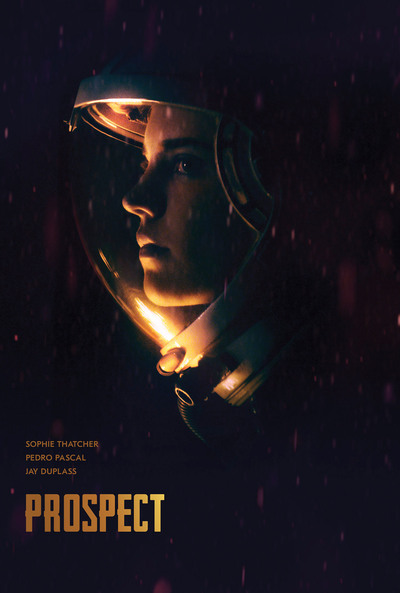 The film is the culmination of years of hard work, bringing their short film of the same name to glorious feature length.

From shepfilm.com, in PROSPECT, “A teenage girl, Cree, and her father, Damon, travel to a remote alien moon, aiming to strike it rich. They've secured a contract to harvest a large deposit of the elusive gems hidden in the depths of the moon's toxic forest. But there are others roving the wilderness and the job quickly devolves into a fight to survive. Forced to contend not only with the forest's other ruthless inhabitants, but with her own father's greed-addled judgment, the girl finds she must carve her own path to escape.”

PROSPECT is a rare, independent sci fi film; not just because it’s Washington-made, but because Caldwell and Earl’s future vision of space travel, family, and survival is tactile and personal. Equipment and ships are grimy, worn, and unreliable; and, once the main characters reach the green moon, the environment is lush, eerie, wild, and overwhelming.

Writes Jessica Baxter in Hammer to Nail, “Prospect is more than just a cool mumblecore sci-fi joint. It’s also a Ray Bradbury-esque existential drama. We learn through casual conversation that somewhere there are people lounging in creature comforts. If Damon and Cee are the have-nots, we can easily imagine the haves whose ranks they long to join. Their mission is extremely risky but Damon feels like they’re doomed already unless they get their payday. It’s a working-class view of the future where the stakes are high, nothing works properly, and there’s no one coming to save you.”

To Northwest natives, the green moon should be familiar: Caldwell and Earl met at Seattle Pacific University and shot their atmospheric feature primarily in the Hoh Rainforest, with a crew that included Tacoma-based filmmakers. Says Wade Neal, Assistant Executive Director of The Grand Cinema, “Part of TFF's mission is to celebrate Northwest-created or centered film. PROSPECT is probably the first science fiction film to build a mesmerizing world out of our beautiful Washington rainforest. It also has a terrific cast - with superb performances by Jay Duplass, Sophie Thatcher and Pedro Pascal - and was directed by Chris Caldwell and Zeek Earl, a Seattle-based filmmaking team. Both directors will be in attendance, and we are always thrilled to welcome filmmakers to Tacoma for an awesome festival experience.”

This isn’t Zeek Earl and Chris Caldwell’s first visit to The Grand Cinema - four years ago, they were highlighted in Filmmaker Magazine’s 25 New Faces of Independent Film and screened their short film PROSPECT at The Grand in 2014. Earl and Caldwell will return to The Grand for their 2018 TFF screening and stay for an audience Q&A.

Opening Night for the Tacoma Film Festival will be held October 4, 2018 at The Grand Cinema in downtown Tacoma. Details and tickets will be available mid-September. 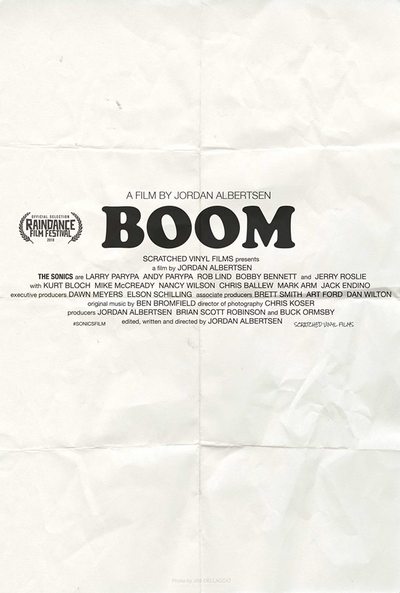 Closing Night’s feature BOOM goes right to the Northwest heart of independent film and independent music: for the first time ever, director Jordan Albertsen tells the story of The Sonics, one of rock 'n' roll's wildest and most influential bands, who formed in Tacoma in 1960.

Often cited as a contender for first ever punk/garage band, The Sonics became a worldwide phenomenon 50 years after their heyday, and are considered seminal inspirations to Nirvana, Pearl Jam, and Bruce Springsteen, to name just a few.

“Boom! Is about one of the best bands in the universe - Tacoma's own Sonics. The documentary tells how this group of working class gentlemen from Tacoma sparked a punk rock fire that will never go out. Jordan Albertsen's explosive rock doc follows the Sonics from their inception all the way to their unbelievable reunion and world tours. The Tacoma Film Festival is the perfect place to celebrate these Northwest Rock and Roll legends,” states Wade Neal.

The documentary features all five original band members sharing their experiences from the The Sonic’s formation to where the band is now. 'Boom' is a deep dive, exploring how a relatively unknown band from the Pacific Northwest shaped music for decades to come. Featuring interviews with homegrown heroes and breakthrough artists alike, Pearl Jam, The Sex Pistols, Heart, Mudhoney, and more.

Closing Night for the Tacoma Film Festival will be held October 11, 2018 at The Grand Cinema in downtown Tacoma, and will feature director Jordan Albertsen for a filmmaker Q&A.

Passes are on sale now; additional details and tickets will be available mid-September.

There are two ways to make sure you'll be able to enjoy TFF's opening and closing night right now: donate at the $150 level or more and help us hit our fundraising goal, or purchase your TFF VIP early bird pass:
Individual tickets for TFF films will go on sale in mid-September.

This release is just the first in a series of programming announcements for the 13th annual Tacoma Film Festival. Please follow the festival on Facebook, Twitter, and Instagram, or subscribe to our newsletters here.
Grand Events, In Theaters, Only at The Grand, Tacoma Film Festival (0)Comments
Back to Blog