David Lowery’s Pete’s Dragon is a warm, and sentimental palate cleanser that allowed me to laugh out loud, shed a tear, and carry on. With challenging, emotional, and weird films filling my brain lately (The Lobster, Free State of Jones, and Swiss Army Man) this re-imagining of the original 1977 live-action-animated-musical that I loved as a kid was gentle on my eyes, ears, and emotions.

Like the original, the new Pete’s Dragon is mostly set in the woods, though this time the scenery is lush, green, and softly lit instead of dark and foreboding. It also features a wholly live-action cast, save Elliot, who receives a beautiful upgrade from hand-drawn cartoon to a computer generated masterpiece. Elliot is jade green, furry, and if I could just reach out and touch him I know he would be warm! Aside from the setting and the names of the main characters, this is a totally new tale. 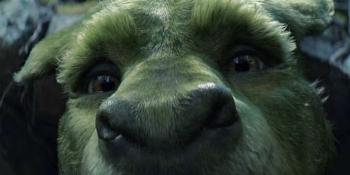 A boy and his dog… er, dragon

Pete, orphaned in the woods by a car accident while on an adventure with his parents has but one talisman from his previous life: a picture book about a dog named Elliot who gets lost in the woods. We learn from Robert Redford’s grandfatherly narration that Elliot the dragon is also an orphan of sorts, and secluded in the mystical forest, Pete and Elliot form their bond. They chase each other through the trees, splash in the river, and scare away bears. Loyalty, comfort, companionship, and a sense of belonging are shared between the two that at times reflects one’s relationship with a favorite childhood pet, and at other times the familial bond is much deeper.

A family of choice

Inevitably the summer-vacation-meets-woodland-fantasy-like paradise that Pete and Elliot exist within must meet the “real world” and therein lies the tension between our darling duo and the rest of, well, everybody else: 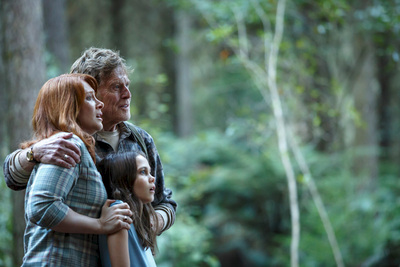 Kindhearted forest ranger Grace (Bryce Dallas Howard of Jurassic World fame) who happens to be motherless wants to rescue Pete who wants to keep his friend Elliot safe from society.

Old man Meacham is somewhere in the middle as Grace’s father, played by Robert Redford, who insists upon regaling the town with his dragon-lore even though no one believes him.

It’s hard to miss the parallel between art and life here as this is indie-director David Lowery’s first big studio production -- and with Disney Studios no less. Less than a decade ago Lowery was living in his car and editing videos from the backseat. Just last year he was named one of Filmmaker Magazine’s 25 New Faces of Independent Film to watch for new forms of storytelling. Despite the $60 million budget on Pete’s Dragon and all that entails, Lowery takes his time and keeps the magic alive in what could have been just another Disney classic remade for hipsters.

The camera lingers in small moments that have big meaning—the moment that newly orphaned four year old Pete steps gingerly into the palm of a giant dragon for the first time, Pete and Elliot curling up for sleep in their cave after Pete reads his picture book aloud for them, and the pair being reunited after a close call where Pete runs into the waiting arms of his dragon who literally scoops him into a paternal embrace. These moments are allowed to unfurl rather than being rushed for the sake of moving the story along. There is patience and tenderness in Lowery’s filmmaking which keeps this family love story genuine.

Pete and Elliot's love for each other, their playfulness, belongingness, and willingness to protect each other shows everyone else in the film what family is. David Lowery’s care in communicating that with Disney’s resources is where the magic really happens. Everyone finds a family in this film, including its director.