Land of Mine is beautifully brutal
It is a poetic irony that a film can be so visually stunning, powerfully written, wonderfully acted, masterfully directed, and at the same time hard to look at. Land of Mine achieves just that as it tells the story of young German POWs who are tasked with removing thousands of mines with nothing more than their bare hands. 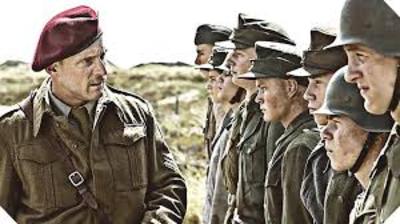 It is no surprise that the film was nominated for Best Foreign Language Film at the most recent Academy Awards as it is truly a masterwork that makes the most of the setting (which is mostly just one beach, a house, and the area surrounding it that the young boys are tasked with clearing). It is both contained and expansive at the same time as the film focuses on a small group of well-developed characters while also grounding itself in an emotionally resonant time period.When it comes to war cinema, the story is usually centered around the conflict or event itself. With Land of Mine the journey begins in the aftermath of WWII and is set in a Denmark that is still reeling from the bloody conflict as they attempt to rebuild. This creative choice by writer and director Martin Zandvliet makes for a compelling and thoroughly engaging story that draws you in from the beginning to the end without letting go.

Land of Mine showcases brilliantly a conflicted and nuanced man who is tasked with overseeing the young boys who are being burdened with such an impossible task. Played brilliantly by Roland Møller, the character of Sgt. Rasmussen vacillates between hate and empathy for the young men who, as they are all German prisoners of war, represent the enemy to so many, including Rasmussen. Moller brings depth to a role that seems to have been made for him. As a viewer, I consider myself lucky to have seen Moller in what has become his breakout role that the director had to fight for him to get as he was a former criminal who is a self taught actor that was viewed by many as a risky casting. The supposed risk paid off as he is fantastic in the role. He lives, breathes, and inhabits a conflicted man in the aftermath of war. He is the character that is the most entrancing in his loneliness as well as his vitriol for the young boys he is tasked with commanding. 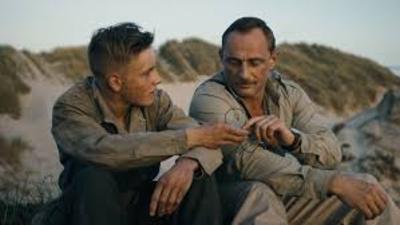 The moments where small details play out in the quiet scenes are the most brilliant, showing that Rasmussen desires to form connections with the boys as he also struggles to grapple with the moral weight of what he must do to those he, and many others, still view as the enemy. It is in moments like these where the film asks the deeper questions about what the aftermath of a conflict will look like and whether reconciliation is possible. The film is grounded in a time where the pain of war is still haunting people. However, the film deftly navigates the distrust and fear still broiling under the surface as well as the potential the characters have to understand each other even as the backdrop is such a daunting task.

This is where the film excels as it never feels like any scene is wasted or that any moment is unimportant. Everything carries a weight that is even more accentuated by the fact that every day means another day of risking their lives to clear a beach that the camera revels in the vastness of. I couldn’t help but feel overwhelmed with each beautiful look at the landscape of the beach as these gorgeous shots establish the horror of the task the boys are faced with as well as tracking their progress in the imprints they leave in the sand behind them.

A Deconstruction of Our Nature

Zandvliet has created a painting of our ugliness, our kindness, and our very nature in this haunting war drama. He has said, “It’s human nature to want revenge after something terrible happens. Hate comes out.” The film wrestles with that idea and I came out on the other side attempting to stay afloat in what is a very unique, exquisitely constructed film that never cheapens what ends up being an enthralling journey. It is a revelation to see a film that trusts an audience to follow a narrative that embraces moral ambiguity that is often messy, usually conflicting, but in this case definitively powerful. With each individual frame, the film unveils a stunning story that is unflinching in the questions it poses and the emotions it lays bare as viewers grow along with the young boys who are forever changed by an unimaginable experience.

Check out this film during it’s opening weekend at The Grand if you’re curious about seeing a historical war film that breaks with convention and follows strong central characters on their cataclysmic path.

Showtimes and tickets are available here.