Let me just start this off by stating that the Tacoma Film Festival programming is off the chain! Our stellar Film Festival Director/Programmer, Laura, selected the best of the best of the best films from the nearly 1800 film submissions we had this year! Every year, I am completely blown away by the talent of the filmmakers who submitted films, both local and beyond, and this year is no different!

If I had to narrow it down, here are the top five films and events I am most looking forward to this October:

Join in the fun and buy tickets for The Veldt Preview Party on Friday, October 6 at 9:00 PM to enjoy the VR experience before it opens to the public – food, drinks, and DJ included!
Or you can drop-in on Saturday, October 7 or Sunday, October 8 from 11:00 AM - 7:00 PM at no cost, as space allows! We do expect this experience to be a popular one, so there may be a wait-list for entry depending on when you arrive. Learn more about the Veldt.

Synopsis: Bill Nye is a man on a mission: to stop the spread of anti-scientific thinking across the world. With intimate and exclusive access--as well as plenty of wonder and whimsy--this behind-the-scenes portrait of Nye follows him as he takes off his Science Guy lab coat and takes on those who deny climate change, evolution, and a science-based world view.

Screens once only on Thursday, October 5 at 7:30 PM at The Grand Cinema. tickets & more information

Synopsis: This short film music video package is put together to celebrate filmmakers behind music videos! We have a great slate of new music videos from both local and national directors to view on the big screen!

Synopsis: Sidney Hall finds accidental success and unexpected love at an early age, then disappears without a trace.

4) Izzy Gets The F*ck Across Town

Synopsis: A broke ass, job hopping, riot grrrl musician wakes up from a one night stand with a hangover that would make Bukowski weep, to discover her ex-boyfriend - her soul mate - just got engaged to her ex-best friend, and their engagement party is tonight. What the %&*$?! No way! Raging, without transportation and brand new to Los

Angeles, Izzy embarks on a desperate quest to make it from the westside to the eastside in five hours to break that shit up by any means necessary. No matter the bizarre encounters and strange twists of 'fate' that wait along the way, Izzy's gonna get the f*ck across town and fulfill her damn destiny. 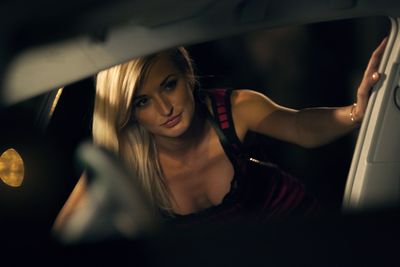 Synopsis: Skidding into middle-age, a stay-at-home dad must drive for an Uber-like rideshare company (DriverX) to help support his working wife and two young daughters. But low pay and wild LA nights put an even greater strain on his marriage.

Pick up a print copy of our full 2017 TFF program at The Grand Cinema, find the program online, or download TFF's first app on Apple or GooglePlay for more information on all of the films, events, and activities going on October 5-12th!

Marlee Johnson first joined the team as a volunteer in 2013, was hired as a part-time house manager, and now works as Director of Operations. Marlee’s favorite part of her job is interacting with volunteers and patrons. She believes The Grand is a fantastic place for meeting interesting people and relishes being able to interact with such vibrant members of the community. When not at The Grand, she enjoys attending film festivals and traveling!