Menu
August 22, 2016 Experience a post-film discussion at The Grand

Media does this weird, paradoxical thing - the reality it purportedly reveals seems to mask at the same time the underlying truth of its subject. We see this slippery quality at work in the new documentary Weiner, the story of Anthony Weiner. The disgraced New York congressman shared with the world via online photos the most private part of himself (namely, his private parts), yet a clear explanation of his inner motives and neuroses evade the public to this day.

Viewers of Weiner, which chronicles of his failed 2013 campaign to win the Big Appleʼs mayoral seat, might hope to have some questions answered. But it turns out the documentary serves as just another filter through which we look, dimly, at an intriguingly guarded public figure.

Despite this, Weiner offers a very entertaining ride across the modern political landscape. The brisk editing (completed by Blackfish documentarian Eli B. Despres) touches on the nuts (sorry) and bolts of campaigning - the hunt for a home base, the tedious cold-calling of donors - before zipping off in a new direction.

One gets the sense of the mountainous work before Anthony in restoring his image, especially in the patient way he answers or avoids the same questions repeated ad nauseam about his personal life. His solo defense against a brutally honest man in a packed room of City Island residents gets my vote as one of the filmʼs best scenes.

Moments where the candidateʼs composure cracks prove equally engrossing. Somehow the sight of men shouting in each otherʼs faces at the entrance to a Jewish bakery gives me New York nostalgia (though Iʼve never visited). And a blunt query from a news show host - “What is wrong with you?” - unleashes another of Anthonyʼs trademark tirades. Weiner makes it clear that the in latter confrontation, neither Anthony or the news host share the same physical space so Anthony injects his rage into, of all things, the inanimate, unblinking lens of a camera. This same transference of emotion and desire across the Internetʼs silent void got him into trouble in the first place.

The great revelation Weiner unearths about its hero - a compulsion to define and validate self through media representation - is only skin deep. Yet a question remains: What does giving in to this filmʼs pleasures say about my own attraction to the surface of things? What is wrong with me, indeed.

Watch a movie, learn from each other

I saw Weiner at The Grand Cinema as part of their weekly Tuesday Film Series. I volunteer regularly at The Grand and had offered to lead the post-film discussion with my fellow audience members. 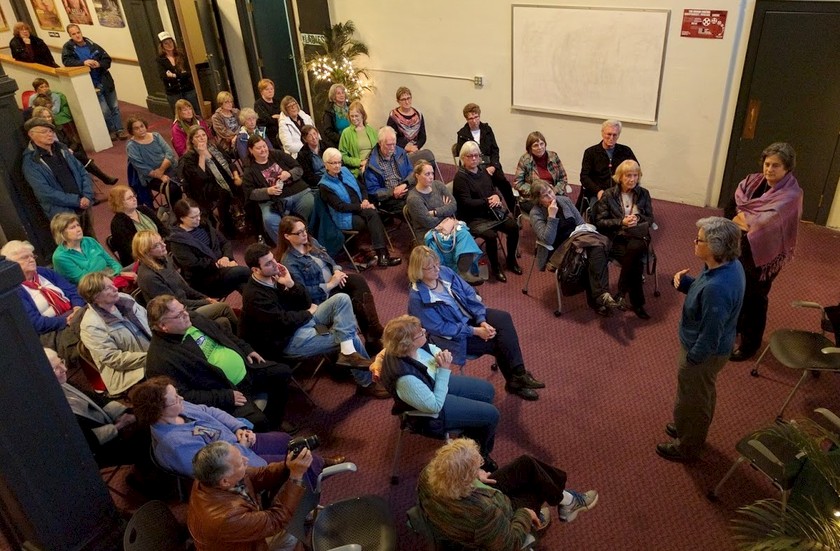 Any movie depicting politics, especially in a national election year, had to draw at least a few folks eager to speak their mind. I wondered whether Iʼd find it a challenge to keep the conversation focused on the film, or whether weʼd get lost in a thicket of tangents involving individualsʼ political beliefs.

Fortunately, as Bush would say, for the most part we “stayed the course.” And as in a debate between candidates, for my moderator role I tried to keep a timer (at least a mental one) set to go off whenever a speaker pontificates for too long, and to turn the spotlight on someone else. That way, hopefully everyone who left the discussion felt, in true democratic spirit, they received an opportunity to voice their opinions on the film.

Ten audience members including myself joined the Wiener round table, each with their own perspectives and insights. I had my own thoughts on how the documentary depicted certain “characters,” most notably Anthonyʼs long-suffering wife Huma, who despite her role as an influential political advisor for Hillary Clinton, appeared timid in the midst of her husbandʼs controversy and apparent self-destruction. However, a fellow viewer saw in Huma a strength and resilience in standing by her family through a relentless campaign that also made sense.

From this example and others, I began to see another important quality of a decent moderator: the willingness to let othersʼ understanding of an issue enhance oneʼs own. And when it comes to politics, that qualifies as something of a miracle. 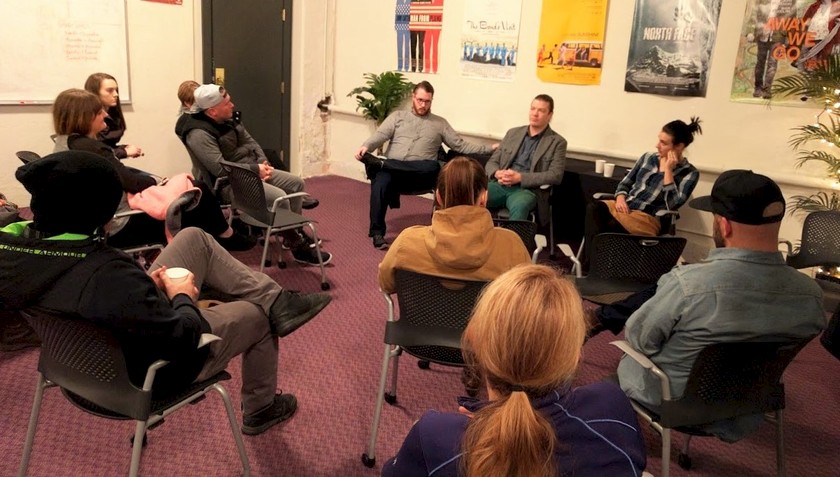 Keep checking The Grandʼs calendar for more post-film discussions coming soon. See you at the movies!

Featured images in this post show three different post-film discussions. From the top, filmmakers and artists discuss the film First Girl I Loved as part of our Queer Filmmakers Meet-Up for Tacoma Pride. The second photo shows the crowd who discussed Suffragette with State Representative Laurie Jinkins and Maralise Hood Quan. Last, a group joins coffee experts to discuss the documentary Barista.

Christopher Wood studied both video production and film criticism at the University of Washington Tacoma, and for a number of years served as one of the film writers for The Weekly Volcano. He began volunteering at The Grand Cinema in May 2016, and enjoys sharing ideas on movies with others. He continues to shoot and edit videos, and his work can be found here.

Grand Cinema Staff About The Grand, Grand Events (0)Comments
Back to Blog