Captain Fantastic begins with Ben (Viggo Mortensen) and his large family (minus their mother) living in a self-proclaimed paradise in the backdrop of our own Washington forest lands. The family lives in isolation, completely self-sufficient, and strictly taught complex schooling practices by their xenophobic father. This beginning is reminiscent of Swiss Family Robinson with a dash of Into the Wild, but when we get to the meat of the film -- following the family pack as they road trip to their mother’s funeral – it felt to me as if it drew the most from Little Miss Sunshine. The family takes to the road, immersing themselves in society for what seems to be the first time and reacting with much disgust for the practices of mainstream society’s structure of a codependent community. 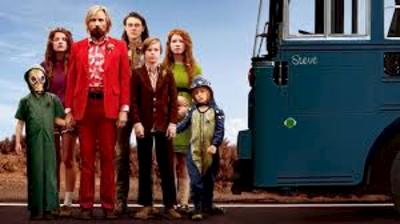 Writer-Director Matt Ross (this being one of his first films behind the camera) methodically balances heartwarming moments of a family unit working in harmony with heart wrenching scenes of a family coping with death and disbelonging. Viggo Mortensen stands out well on his own as the misanthropic “captain” of his family, but he shares an equal spotlight (or more appropriately, lamplight) with his overly precocious children who quote and celebrate Noam Chomsky’s birthday as we would Christmas. Mortenson’s performance stands out excellently on its own, but each of the six children are developed effectively as independent characters instead of a simplified group mind.

The Movie as an Argument 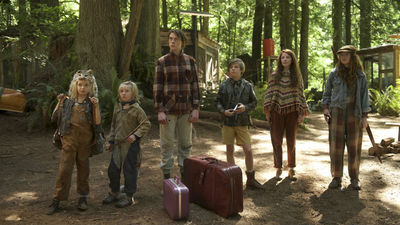 These many characters each offer their own perspectives on their accepted world and the world they reject. Mortenson is overly protective of their lifestyle and determinant to keep it in the face of those who try to change him; the eldest son (as with all the other children) is a genius but ignorant to social customs when interacting with anyone outside of his own family; and the middle son sees all of the flaws in his family’s lifestyle, desiring to join the civilized world as he grasps for the widely accepted societal concept of normalcy and stability. These character viewpoints support the movie’s commentary on the individuality of isolationism versus being a cog in civilized society. Looking at one subject of debate, education in this “paradise” is superb to our common schooling system, but it also fosters superiority complexes to its recipients, causing disputes between the youth from both respective systems . The unique way of life depicted in Captain Fantastic has many eccentricities and unique perspectives that may challenge dominant points of view and conventional wisdom.

Many of the interactions in this film defied my concept of social norms, and while some of the scenes from this movie made me totally uncomfortable, I had to keep in mind that this family, who distinguishes themselves as unique in the world, also shares their own unique perspectives of life and ways of being. Preset social boundaries are nothing to them. Nudity is not taboo. Anything they deem as an inferior way of living simply is not practiced. And as much as this unconventional upbringing is a curse in the eyes of some of the kids in the film, it is a blessing to us as an audience offering an experience of the world that allows us to see its beauty in a new and unique way.