Where the House Was

Where the House Was

This is a documentary about quickly changing cities. Artists make cities and communities more livable, but are often priced out by the rich developers they draw. Lofts, theaters, studios, and galleries are often replaced with high-rent, low-character high rises. How will artists find new ways to create space for community in cities that are being erased? Does art always have to be a wedge for the displacement of low-income and vulnerable populations? Seattle is faced with just this dilemma when news breaks that an old Victorian house space at 1634 11th Ave is being torn down to make way for a mixed-use apartment building. The theater-turned café and artist space is home to a literary center called Richard Hugo House, and in this documentary, co-founder and former executive director Frances McCue decides to capture what made the place so special. What comes to light is bigger than one building: gentrification, boom-bust cycles, colonization, and grief at the most intimate level. Haunting the film is the literary center's namesake, Richard Hugo (1923-1982), a Boeing worker turned college professor and poet whose 'triggering town' writing technique is still influencing poetry and place-making across the country. Hugo inspired generations of writers in the American West, and in this vivid experimental film, archival footage, animation, interviews with authors, and original poems combine to illuminate how poetry and place intertwine. In the end, a new model for sustaining the arts comes into view. Filmmaker will be in attendance.

Plays with the short film Space Needle: A Hidden History. 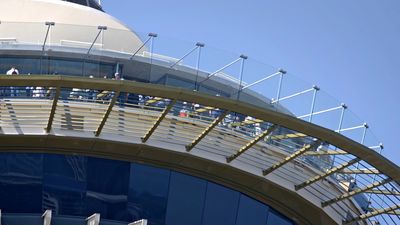 US | 2019 | 1 Pacific NW | 18 min | BJ Bullert
This origin story traces the Space Needle's hidden history back to art, sculpture, architecture, and dance, connecting the iconic structure with the legacy of Seattle-born, African-American dancer, Syvilla Fort. Filmmaker will be in attendance.