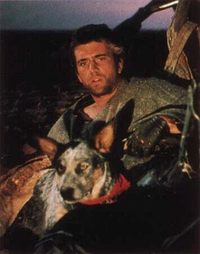 This is a FREE EVENT for all, courtesy of First Night Tacoma and The Grand Cinema. Seating for the general public is on a first come, first serve basis at the box office starting at 10:00pm Saturday December 30.

First Night Tacoma button holders get priority! Holders may pick up their tickets in advance at the box office starting Friday 12/15, and will be granted entry to a priority lineup starting at 10pm 12/30. Present your buttons at the box office for your ticket. One ticket per button. Button holders will be seated first when the theater is opened.

Buttons will be on sale in the lobby, or you may purchase buttons in advance here: FIRST NIGHT BUTTONS

Buy a button and get priority for this wild ride! Plus you’ll have your admission to First Night, a wonderful Tacoma event, in advance of New Year’s Eve. Or, just come out for free courtesy of First Night Tacoma and Weird Elephant at the Grand Cinema.

Synopsis: In the post-apocalyptic Australian wasteland, a cynical drifter agrees to help a small, gasoline rich, community escape a band of bandits. Director George Miller's follow-up to his own 1979 hit Mad Max is proof that not all sequels are inferior to their originals. If anything, this brutal sci-fi action film is even more intense and exciting than its predecessor, although the state of its post-apocalyptic world has only become worse.

A film of pure action, of kinetic energy organized around the barest possible bones of a plot.