Sleep Dealer with special appearance from director Alex Rivera is sponsored by The City of Tacoma Office of Equity and Human Rights and The Grand Cinema as part of Tacoma's Welcoming Week event where communities bring together immigrants, refugees, and native-born residents to raise awareness of the benefits of welcoming everyone.

All screenings are presented free-of-charge thanks to the support of the City of Tacoma. Tickets for both shows will be available day-of when the box office opens. 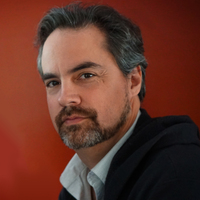 Alex’s documentary work was broadcast on POV, and his feature fiction film, Sleep Dealer, won awards at Sundance and Berlin, screened at MOMA, and was released theatrically around the world. He has collaborated with Manu Chao, Aloe Blacc and La Santa Cecilia. His upcoming projects are being supported by Tribeca, Sundance, Surdna, Time Warner, the Ford Foundation, and others.

Memo Cruz (Luis Fernando Peña) is a young man in near-future Mexico. When his family is victim of a misguided drone attack he finds himself with no option but to head north, towards the U.S./Mexico border. But migrant workers cannot cross this new world border – it's been sealed off. Instead, Memo ends up in a strange digital factory in Mexico where he connects his body to a robot in America. Memo's search for a better future leads him to love, loss, and a confrontation with a mysterious figure from his past.

Clearly, Rivera knows one of the great gifts of the sci-fi genre. An uncanny world invites new ways of seeing. It offers new chances to ask the hard -- and too often, hardened -- questions.

Sleep Dealer is an unusually thoughtful science fiction film, using the speculative energy of the genre to explore some troubling and complex contemporary issues.