After Mina's (Sarita Choudhury) Indian family is ousted from their home in Uganda by dictator Idi Amin, they relocate to Mississippi to start a new life. Mina falls for Demetrius (Denzel Washington), a young carpet cleaner, despite the protestations of their families over their racial difference. The families and their surrounding communities begin to feud, putting even more pressure on the couple's romance. Having to choose between family and love, Mina and Demetrius run away together. 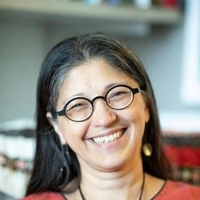 Joshi teaches courses on British literature and post-colonial literature and film, including a course on Bollywood. She grew up in India and believes Mira Nair's debut "deals with the racism and color consciousness amongst immigrant communities in the US both brilliantly and sensitively."

It moves in fits and starts and it isn't obsessively tidy about each and every loose end, but in its sweet, slightly melancholy, gently humorous way, it fills the screen with the freshest, most winning love story we've seen in ages.

With its rich panoply of characters and its acute observations, Mississippi Masala manages to be about much, much more than Demetrius and Mina.