(pronounced: moth-nee) This film follows Sweetwater Sahme and Jordan Mercier's wanderings through each of their worlds as they wonder through and contemplate the afterlife, rebirth, and the place in-between. Spoken mostly in chinuk wawa, their stories are departures from the Chinookan origin of death myth, with its distant beginning and circular shape.

Debut feature film by Sky Hopinka (who had a retrospective program at the #2018TFF!). Filmed in the Pacific Northwest! "Hopinka uses the tale as a clever framing device for contemporary considerations of mortality and growth, reminding us, time and again, that all will eventually return to the ocean." (Film Comment) 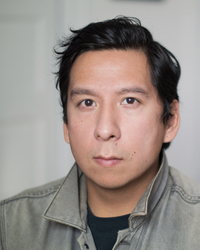 JOIN US FOLLOWING THE 7:00PM SCREENING OF THE FILM FOR A POST-FILM SKYPE Q+A WITH THE FILMMAKER SKY HOPINKA.