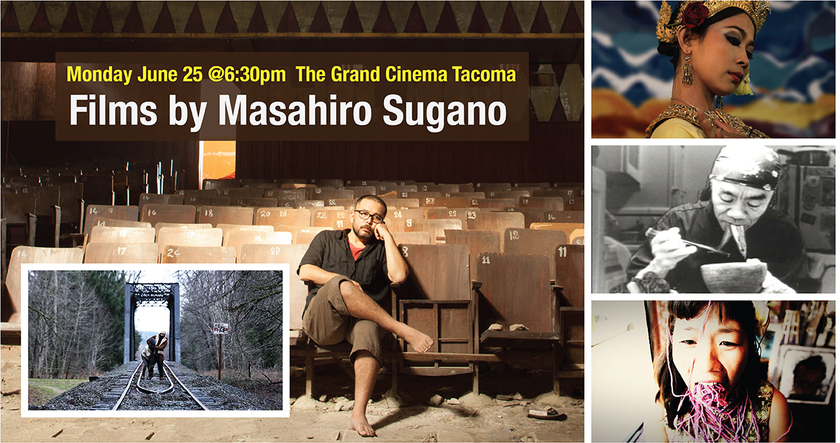 In the summer of 2017, at Feast Arts Center in Tacoma's Hilltop neighborhood, Masahiro Sugano presented a retrospective filmography titled “Perpetual Irrelevance” without having to screen a single film. One year later, this is the follow up to that visual art show in the form of moving images.

At 46 years old, Sugano’s filmmaking career covers his residency across three different countries, several genres and the creation of over 25 independent films. This screening features a curated selection of short films — some rarely seen before and others never seen before! Stay after the program for a Q&A and reception.

The evening includes the debut preview screening of “Deadlock” the much-anticipated short film set in the Pacific Northwest that follows two men, literally bound to one another, as one man holds the other in a headlock.

From animations to magic realism, mundane moments to the sublime, viewers should expect the unexpected as Sugano delivers cinematic works of art.

See the following films as well as some films that will be announced at the event!

Deadlock
2018 / HD Color Video / 14 min / Short Narrative
A short magical realism film set in the Pacific Northwest that follows two men, literally bound to one another, as one man holds the other in a headlock.

Tacoma Uncubed
2018 / Documentary
Recently screened at the Seattle International Film Festival, this documentary focuses on four home-grown Tacoma artists who have been consistently churning out works. Meet visual artists Priscilla Dobler, Jeremy Gregory, Jason Holland and Kenji Stoll as each discuss their commitment to art and community despite the ups and downs of a city in the middle of tremendous changes.

Yarning for Love
2009 / HD Color Video / 4 min 30 sec / Short Narrative
A mysterious expanse of yarn appears out of nowhere and entangles a man and a woman into romance. They soon learn how binding love can be.

Neang Neak (Serpent Goddess)
2012 / HD Color Video / 3 min 50 sec / Dance
A serpent goddess arrives on earth to live among humans. Contemporary and ancient storytelling techniques blend to give a new twist to this modern day metaphor for displacement and the journey to self-discovery.

Hisao
1998 / 16mm B&W / 9 min / Animation
A short film documenting the actual life of an explosive underground Japanese singer and songwriter who is seduced by dreams of fame in America.

Stay after the film for a Q&A with Masahiro Sugano.

Masahiro Sugano, a Sundance Film Fest alumnus, is an award-winning filmmaker whose accolades stretch from a Student Academy Award nomination in 1997 to the 2016 Documentary Award given by the National Asian American Journalists Association, and his most recent 2017 Art Matters Foundation Award. Through his media lab Studio Revolt, Sugano has created short films on the issue of deportation as well as a pioneering force in the art of spoken word videos. Sugano received the 2013 Center for Asian American Media’s Innovation Fund for his series “Verses in Exile” which is on view at PBS online. Sugano’s second feature CAMBODIAN SON is the winner of several international awards including 2016 Best Documentary Award given by the National Asian American Journalists Association, Golden Hanoman Prize at the Jogja Asian Film Festival and the Special Jury Prize at Cultural Resistance Film Fest of Lebanon 2014. He earned a BA in philosophy from Cal State Northridge and an MFA in film/animation from the University of Illinois-Chicago. His film’s screen internationally, in cinemas, museums, schools and prisons. Sugano currently lives in Tacoma and is the Artist-in-Residence at the University of Washington Bothell where he teaches courses in art, filmmaking, and global studies.