Celebrate Opening Night of the 13th annual Tacoma Film Festival with a feature film at The Grand Cinema and after party with appetizers, drinks, music, and a Q&A with directors Zeek Earl & Chris Caldwell. Earl and Caldwell are Seattle-based filmmakers and the short film version of Prospect screened at The Grand as part of the 25 New Faces of Independent

Film in 2015. Celebrate Washington-made film with us and stay for the TFF open mic where festival filmmakers share information about their upcoming screenings. Catering provided by Pacific Grill Events & Catering. 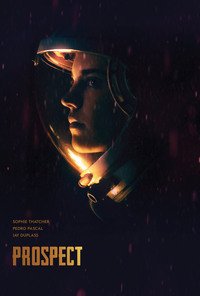 Prospect (2018, US, SCI-FI) A teenage girl and her father travel to a remote alien moon, aiming to strike it rich. They've secured a contract to harvest a large deposit of the elusive gems hidden in the depths of the moon's toxic forest. But there are others roving the wilderness and the job quickly devolves into a fight to survive. Forced to contend not only with the forest's other ruthless inhabitants, but with her own father's greed-addled judgment, the girl finds she must carve her own path to escape.

HELD AT THE GRAND CINEMA