Film Discussion with director of Killing Them Safely 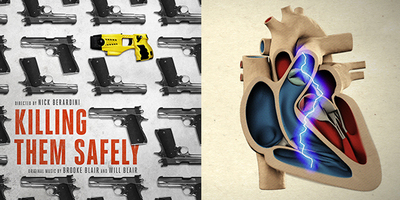 Featured in the Tacoma Film Festival 2015, the documentary Killing Them Safely, returns to Tacoma one day only on December 29 as part of our Tuesday Film Series.

At a time when questions about police methods are at the forefront of the national dialogue, Killing Them Safely brings together startling archival footage and eye-opening interviews with experts on both sides of the debate about taser related deaths to shed much-needed light on an urgent issue.

The film's director, Nick Berardini is one of Filmmaker Magazine's 25 New Faces of Independent Film honorees this year, and he will be joining us via Skype to discuss the making of this investigative documentary after the 6:45 p.m. screening of Killing Them Safely.